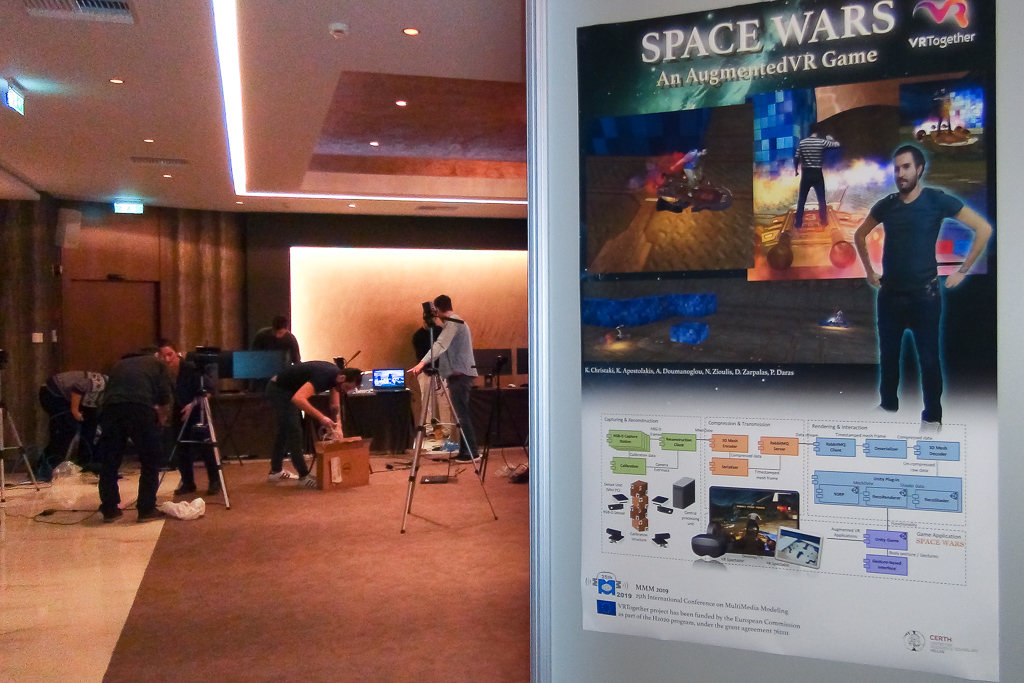 On the 4th day of the conference, CERTH’s (VCL) team presented a poster that depicts the Time-Varying Mesh-based (TVM) reconstruction pipeline as used in VRTogether, as well as a game application called “SpaceWars” that leverages the real-time reconstruction of the users.

SpaceWars is a Tele-Immersive game where multiple players are placed into the same virtual arena on top of futuristic hovercrafts, where they engage each other in a Capture-the-Flag type of game. SpaceWars utilizes the latest version of the VRTogether platform developed at CERTH (VCL) and was developed in order to stress-test the technology with respect to the real-time interactions between remote users within the challenging responsiveness setting of multiplayer game.

The current version of VRTogether’s TVM-based system consists only of 4 Microsoft Kinect sensors surrounding the user. The platform is portable and can be easily deployed and operated as a local capturing station as it is also low-cost in terms of equipment by using consumer grade vision sensors. Additionally, it utilizes an easy-to-use calibration scheme, using a custom built structure requiring commercially available materials.

SpaceWars system also includes a VR spectator mode, allowing users who are not playing to “live” the experience inside the virtual environment watch the on-going game.

During the demo session, all attendees had the opportunity to vote for the best presented demo. Subsequently, the committee convened taking into account the aforementioned votes. SpaceWars was voted as the best presented demo of the conference, winning the Best Demo Award along with the corresponding prize from Springer.

The award is available at the Visual Computing Lab official site (click here).