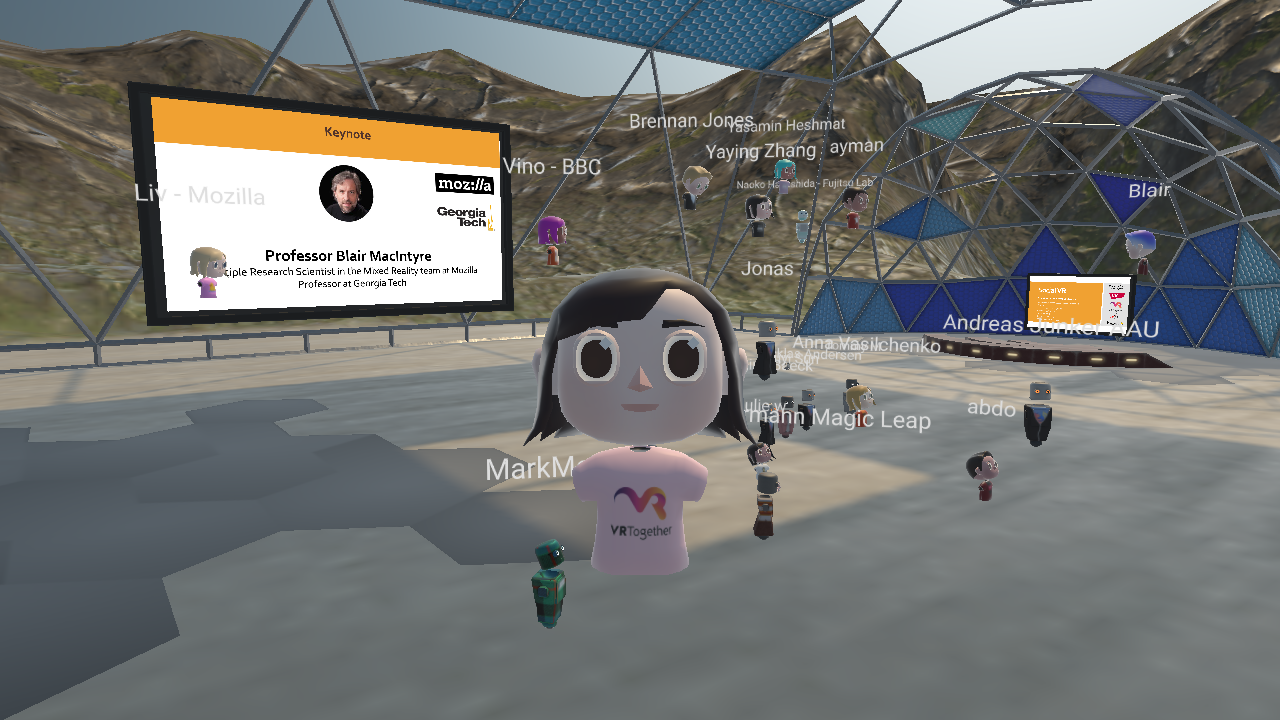 Jie Li and Pablo Cesar, from the Distributed Interactive Systems group (DIS) at Centrum Wiskunde & Informatica (CWI), have successfully organized the ACM CHI2020 Social VR Workshop on a social VR platform called Mozilla Hubs. This workshop was co-organized together with David A. Shamma (FXPAL Laboratory), Vinoba Vinayagamoorthy (BBC R&D), Raz Schwartz (Facebook AR/VR), and Wijnand Ijsselsteijn (Eindhoven University of Technology). Due to the COVID-19, the event, scheduled on April 25 at the Hawaii Convention Center, was cancelled. However, the co-organizers decided to make use of the quarantine as a unique opportunity to explore how a social VR platform could be used to run the workshop. The workshop, “Social VR: ​A New Medium for Remote Communication & Collaboration”, was sponsored by the EU H2020 VRTogether project, and received technical support from Mozilla and FXPAL laboratory.

The workshop attracted mass attention in the ACM SIGCHI community, and on social media. For example, one of the twitter posts received over 13,000 impressions and 1200 engagements. The organizers also received hundreds of requests about participating in the workshop. In the end, the organizers reviewed and selected 20 participants worldwide based on their submitted high-quality position papers (position papers are available at https://www.socialvr-ws.com). The time zones of the participants ranged from GMT-7 (e.g., California, US) to GMT+9 (Tokyo, Japan), but they all managed to meet in this virtual workshop.

The 5-hour virtual workshop was intense, fun and engaging. The virtual workshop space had a main hall with two big screens where the presentation slides or videos could be displayed. Linked with the main hall (Figure 2), there were three breakout virtual rooms for group discussions on assigned topics: user representation & ethics, evaluation methods, and interaction techniques. The breakout rooms ensured that the audio of each group discussion was separated, and would not influence each other. The participants selected their own custom avatars to represent themselves.

The organizers designed an interactive and engaging workshop program, which started with a keynote talk from Professor Blair MacIntyre about his experience of organizing the IEEEVR 2020 conference in Mozilla Hubs (Figure 3a). Then, the big screen showed the slides prepared by participants to introduce themselves and their position paper, and each participant was invited to “fly” next to the big screen to give a 2-minute pitch about their paper. Next, they were divided into three discussion groups based on their preferences for the three pre-defined social VR topics by the organizers (Figure 3b). Finally, the organizers brought all the participants back to the main hall to present the discussion results.

The whole workshop went smoothly. Many participants reported that the activities of the virtual workshop were as engaging as the real physical workshop. It was easy and natural for them to follow the keynote talks and to contribute to the discussions. Even during the break, many participants chose to stay and explore the virtual space (e.g., dive into the virtual sea, see Figure 3c). After obtaining consent from the participants, the organizers managed to collect relevant data about the position, movement, and interaction of the participants in the virtual environment and with each other. Currently, the organizers are continuing the exploration of the possibilities offered by Social VR platforms through an online survey, and semi-structured interviews with the participants.

The workshop ended with fruitful discussions about the future of social VR technology. The participants and the organizers foresee the full potential of social VR as a new medium to connect people across the world, and engage them to communicate and collaborate in a virtual space for hours. Many participants shared their engaging and meaningful virtual conferencing experience on social media, and expressed their appreciation towards the organizers through emails. A full report on how well social VR platforms may support remote scientific events will follow.