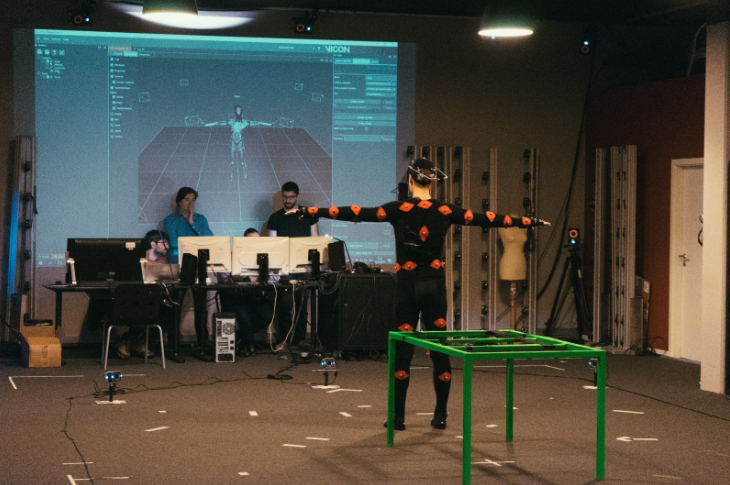 As we said in our previous post (by our partners Artanim), we started and finished the shooting of the first technology demonstration, also known as the pilot 1, on the first week of April. Both Entropy Studio and Artanim worked together in Artanim’s headquarters located in Geneva (Switzerland).

After a short flight from Madrid to Geneva and meeting our lovely Artanim mates, the first step was to scan all the actors with more than 80 cameras, to capture every inch of their bodies. Steve Galache (known for his work on The Vampire in the Hole, 2010; El cosmonauta, 2013; and Muertos comunes, 2004) Jonathan David Mellor (known for The Wine of Summer, 2013; Refugiados, 2014; and [Rec]², 2009) and Almudena Calvo were the main characters of this first experience. The scanning process of the actors can be seen in the Image 1. They were dressed the same way as in the shooting scene.

While some actors were being scanned, the rest of them started to practice their texts supervised by Ignacio Lacosta, the director of this cinematography piece. Ignacio gave them some directions, recommendations, and pieces of advice to adapt “traditional acting” (like the ones on the stage of a theater) into an appropriate acting for this different environment, with all the virtual reality aspects, as seen in the Image 2.

In our second day of shooting in Geneva, the whole chroma background was set up. After a couple of rehearsals under the supervision of Ignacio, everything was prepared to start the shooting. An amazing team of cameras, electrical technicians, producer and stylist and other incredible workers were behind this experience making sure that the shooting was going perfectly. Not only that, the level of professionalism was incredibly huge, so we could record everything that we wanted sooner than it was planned.

The main point of the third day was the motion capture shooting, used to record the movement of the actors and the objects that they used in this scene. The Image 4 shows the capture of the movement with a special suit that allowed to track actors motion in the scene. Thus, all of the scenes of the pilot were repeated, but this time with no chroma background. Once again, there weren’t any problems during the shooting and the work was finished sooner than it was expected!

It was an incredible experience and we had a blast. That’s why we want to thank our Artanim mates for their hospitality and professionalism, as well as the actors and all the technical team that made possible this first pilot of the VR Together project.

Remember that if you want to keep up with updates about the project on social media, you can follow the hashtag #VRTogether_EU on every social website and the @VRTogether_EU official Twitter profile.