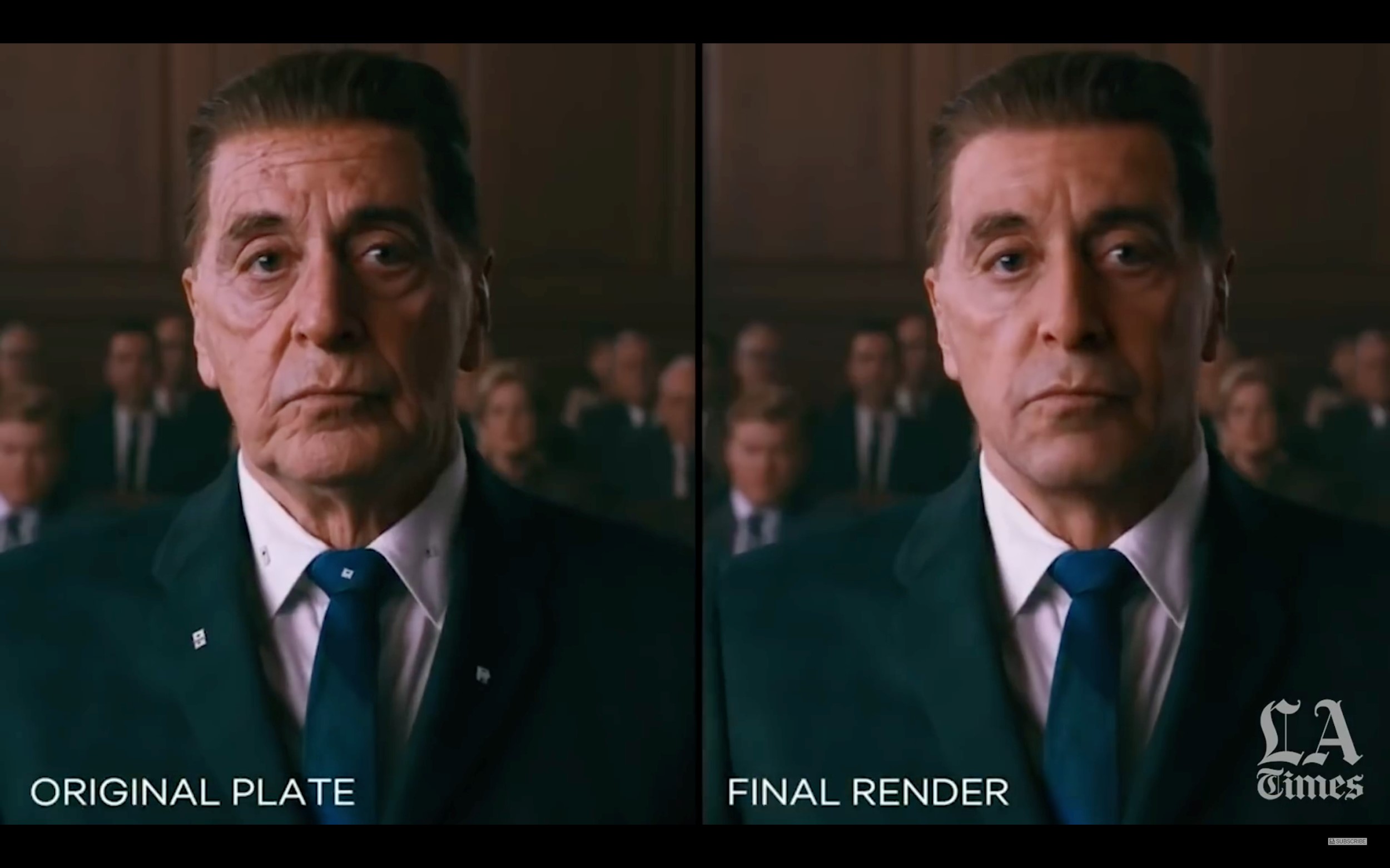 The Irishman is a 2019 film directed and produced by Martin Scorsese. It received 10 nominations at the 92nd Academy Awards, including Best Picture, Best Director, Best Supporting Actor and Best Visual Effects. Even though 1917 won the latter, The Irishman was awarded as Outstanding Supporting Visual Effects in a Photoreal Feature and Outstanding Compositing in a Photoreal Feature at the 2020 Visual Effects Society (VES) Awards, due to its groundbreaking anti-aging effects.

The film takes place from 1949 to 2000 and it goes back and forth in time. Since actors were supposed to play characters at different stages of their lives, making the cast appear decades younger was one of the main challenges of the project. To this end, a team of VFX experts developed a new tool to make the actors look younger. Instead of using face masks with little dots on them in order to post-produce the content—actors would have felt constrained in some ways—the production team split in two groups: one in charge of the camera system and one in charge of the new cameras surrounded by “witness cameras”.

These last cameras were infrared cameras, which made each plane look shadow-less. This invention consists of two high-resolution Alexa ARRI mini cameras located next to the primary camera, a RED Helium. This system captures the facial expressions from different edges with the essential on-set lighting, and shed infrared light onto the on-screen characters’ bodies while staying imperceptible to the camera.

Since the system can get confused when there are big differences between shadows and light areas, the team had to calibrate and equalize the light, and both extra cameras recorded in infrared, thereby preventing shadows. After this, the system analyzed the lighting information and made a “renderable mesh of geometry for every frame”, according to one of the VFX experts.

The team used the FLUX method (F stands for face and LUX refers to the lighting) to capture each facial performance of actors and managed to understand how their faces were shading and how the light was behaving at any moment, in order to incorporate this information into their 3D model. The great achievement of FLUX was to use actor’s faces with rendering and compositing by traditional animation, because of the requirements of the crew to maintain each take as natural and pure as possible. To this end, shots of each actor performing various facial movements were taken separately. Then, using a library of previous movies by the actors, the VFX team was able to recreate how they used to look back in the day. Four different models for each character at different life stages were created, and with the use of each tool in the pipeline, the team finally succeeded in making characters look younger. The movie has received almost 250 nominations from different institutions and a very acclaimed response from contemporary filmmakers and experts.

The development of these technologies in real time is in line with the main research of the VRTogether project. This is another example of how the capture of elements in real time through cameras and scanners complements the entire process for different fields and areas, such as medicine, art, engineering, etc.